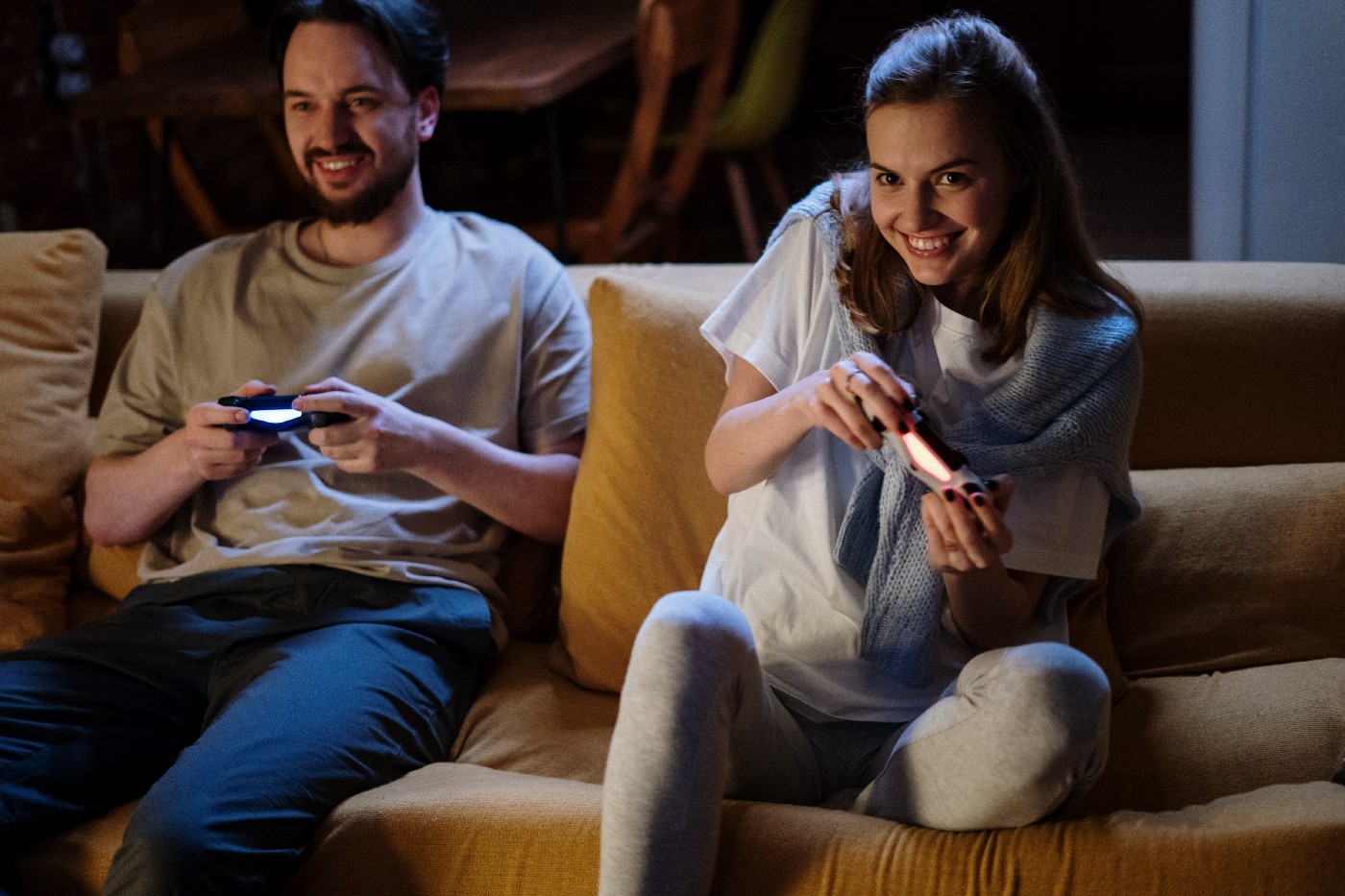 Time to break the relationship stereotypes of dating a gamer guy.

A Gamer emailed me and asked if I could tackle the topic of Gamer boyfriend stereotypes when it comes to relationships. He defined his objection to being grouped in with relationship inept guys, just because he is a gamer. I’m sure there are many Gamers out there, in a devoted relationship, which can sympathize.

As a Gamer’s Girl (GG), I too have been met with disapproving frowns when I mention my Gamer’s hobby. No one likes to be taken out of context in such a negative way. If I like to cook and clean, does that make me a brain-dead Stepford wife? I think not.

GGs and Gamers are immersed in this world and culture that we see in many colors and textures. It’s a shame that it’s broken down so quickly into flat, black, and white. Those quick to judge see the Gamer’s world as an immature waste of time and view the people within it, a direct reflection of their surroundings. Where does this viewpoint come from? Why can’t Gamers and the rest of the world coexist without culture bashing? Why does my Gamer steal my big, fuzzy socks during winter?

What Are The Stereotypes Of Dating A Gamer?

Once upon a time, I read an article outlining the behaviors of today’s young men vs the men of the 1960s. If you are a man of the 60s, chances are, by the time you’re 26 you’ll have married your high school sweetheart, have a career, be financially independent, married with children, and working towards buying that house with the white picket fence at the end of the block. The article goes on to describe today’s young man as something quite the opposite.

Categorized as a “Man-Child” and diagnosed with “Peter Pan Syndrome,” today’s young man avoids commitments set out by the adult world. In other words, he never quite grows up. The “adult commitments” are outlined as a career, financial independence, marriage, children, and working towards permanent living. Not only does the article explicitly state that man-children make less than adequate husbands and/or fathers, but they are also selfish and ultimately underachievers.

They stick to the video games of their youth and prefer the path of least resistance. Their apparent lack of enthusiasm toward real responsibilities makes them tragic when it comes to relationships. They go from girlfriend to girlfriend until pushed toward some kind of commitment that takes them away from pursuing their childish habits. More than likely, they’ll simply recluse and make no effort toward outside relationships thus making no sacrifices. If cohabitation does take place, they take advantage of the live-in mommy, without the decree of marriage, for as long as possible. Long story short, Gamers aren’t the “manly-men” of the 60s and women shouldn’t bother with the lower species.

Being a female, I’m guessing I’m supposed to clap my hands and shout “hurrah” for demanding a manlier provider. But if I did that, I’d probably have to get my ass back in the kitchen where I belong.

So, where do I begin in rebutting this stereotype for male Gamers? Anything “overdone” by an individual can create behaviors to fit this profile. Responsibility avoidance, the path of least resistance, selfish priorities. Look at extreme artists, scientists, workaholics, etc. A “man-child” is a development of the person, not the culture they belong to.

Based on this article and the negative opinions of “outsiders,” an adequate spouse is supposed to be manly. To be manly, you must be an adult, and to be an adult, you must follow the list of commitments set out by Society. Isn’t it annoying when Society tries to tell you what to do?

Breaking The Stereotype Of Dating A Gamer

Yes, while some might take a little longer to breed a desire to make “adult commitments” on Societies terms, that doesn’t make a Gamer less of an adult. By reevaluating the definitions of those commitments, you’ll see that many Gamers are just as responsibility-driven.

In my opinion, if you can follow these commitments, you’re an adult, therefore you are manly and thus adequate for relationships.

Oh, and by the way Society, it’s not just men who don’t want to be married and have a bunch of ankle-biters running around. Women are so career-driven and independent now that the marriage rate decline is in large part because Career Barbie made a bigger impact than expected. Yes, Marriage and children are natural and mature steps to make. I’m certainly not downing those who are ready and wanting to settle down. I just think there are different ways, to sum up, a human being other than what society dictates.

So GGs, the next time your Uncle Bob gives you a hard time for dating a Gamer, tell him to take his Gannon Dwarf attitude and shove it up to his evil realm “A-hole” b/c Princess Zeldas come and go, but it was Navi that was there for Link come hell or high water – and that’s what counts!

Why You Should Date A Gamer?

One of the highlights of being a Gamer’s Girl is showing off your cool gamer girlfriend status. There’s a sense of pride and joy when you hear that your gamer, your gamer’s friends, or fellow gamers, in general, consider you an awesome companion. Much like being the cool mom on the block. Admittedly so, this desire is sometimes fed by the need to be better than other girls or to indulge your boyfriend enough to make others jealous of him. Sometimes there’s just no explaining why women do the things they do. It is IMPORTANT to note that you don’t want to spoil your gamer with his problems – make sure he deserves the reward and he knows why he’s getting it.

What Are The Best Gifts For A Gamer?

So what are some simple ways to reward your gamer? Well, one of the benefits of dating a gamer is that you get to be childlike with each other without judgment. You get to play games, rough house, make silly noises, or make wacky faces all without apprehension. With that being said, often times a way to reward a gamer has the same principle as rewarding a child.

You can buy him a new toy to show off, take him somewhere fun that he’s been dying to go to or buy him a cool poster. These things might not fit well into your budget, but you can also go simple and achieve the same result. A more budget-friendly idea is to simply bake him something to bring to work. Cookies, brownies, cupcakes, etc. You can even personalize it by using frosting to make gamer references or characters. Whatever you choose – we all know a way to a guy’s heart is through his stomach.

Number 5 hit home for me last night. My Gamer already had plans to watch some Anime with his friend and play a little Champions Online before the beta goes temporarily offline. Right as we started to cook dinner, I received a call from my sister telling me our grandfather lost his battle to cancer. I, of course, needed some private time to call family, so he offered to take care of the cooking.

When I was off the phone and eating dinner, he asked me if I needed more private time or if I needed him around. The look on my face must have given away that I didn’t want to be left alone, but I didn’t really want to “talk” either. With a slight nod he asked, “Wanna play some Left 4 Dead?” “Can we?” I replied. “Sure, I’ll start up the XBOX.” We played a few rounds before he tucked me into bed. He hoped online, without his headphones on, while I fell asleep to the hum of his computer. I am, truly, a lucky GG.

Who Is The Girlfriend Of A Gamer?

“Girlfriend Of A Gamer” is also called GG. A “Gamer’s Girl” (GG) is a woman who dates, has fallen in love with, or is married to a gamer. GGs are typically casual gamers themselves. In fact, a lot ofGamer’s Girls learned to play video games or tabletop games because they wanted to take interest in their significant other’s activities. It may not be their main hobby, but they have made that important step and have entered their gamer’s world.

How To Be A Good Girlfriend To A Gamer?

A successful relationship with a gamer means having a basic knowledge of games as well as the gamer culture. That includes anything from language, movies, websites, humor, events, etc. It is critical for a GG to understand the world their gamer lives in. That is if they want to be a happy GG. Not every girl was meant to be with a gamer. If you choose to ignore, despise, or resent that world – you were simply not meant to be a GG. And that’s ok – there’s plenty of fish in the sea and you should be with someone that makes you happy.

It’s a big world and if you’re new to it, it can be a tad bit overwhelming.

This is why I think GGs should help one another. By sharing experiences and knowledge, GGs can help break down communication barriers, find relevance in the gamer’s world, trade tips, jokes, and fun activities, support each other when their gamer’s world conflicts with reality, and strengthen their relationship overall. Most women who have never dated a gamer simply don’t understand and offer advice that might not be compatible with our relationships. Try talking to a soldier’s wife and giving her advice when your husband has never been to war. That’s why it’s important to talk within the ranks. GG to GG. Check out our gamer couple goals if you’re interested!

OK, I guess you are enjoying my words if you make it to the end of this article. Make sure to check out the following relevant content to become a better gamer’s girl, gamer girl, or gamergamer’s girl ;3